There are a number of ways to learn the basics of conducting and ways to apply them. Rather than piecing it all together a little at a time, I offer a way to see the whole picture at once. Every part from the basic coursing orders to choosing practice touches and composing your own in your head on the spot.

The grounding pattern to everything is of course the coursing order for the plain course. It is cyclical...

How you view the order usually depends on the bell you are ringing or the bell that is unaffected in the touch (if one is). Accept viewing the order from your bell regardless of whom is affected by calls then omit your bell to have a simple working order of the remaining three.

Based on this coursing order and a few basic premises you have complete control over everything. 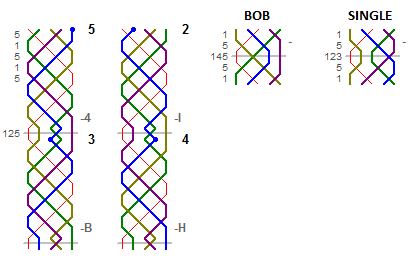 In Plain Bob Doubles there are available:

With the two calls there are only four changes you can make to the three-bell coursing order.

Memorise this table and you will have a masterful control available from your head:

In its simplest form, this is what you need to remember. Use whatever names suit your memory if these aren't easy for you to remember. I like to remember the effect of the bobs and then reverse it for a single.

From that pattern you can compose any practice touch you like on-the-fly.

Any call you make in plain bob doubles affects three of the four bells. The other one continues as if no call was made.

As an example, from the random order of 432, if you wish to make continuous calls that do not affect the 3rd, you must move it through the order one call at a time, leaving the other bells where they are: 432 -> 423 -> 342 -> 432 -> ... ; this proves immediately that if you ring any length with one completely unaffected bell, the touch will consist of only three rotating coursing orders.

A plain course of bob doubles has 40 changes (4 leads of 10 changes each, one lead for each place-bell). When you have a particular coursing order - if no call is made - those 40 changes will be repeated forever.

When the coursing order is 5324 one of those changes is rounds, at backstroke, at the lead end (of course). This means that, no matter where you enter the plain course, within 40 changes you will reach rounds and the end of your touch.

The order 5423 (or 4235, remember it's cyclical) is the reverse of the plain coursing order. You will get the same changes, but they will happen on the opposite stroke to normal and in opposite order, backwards if you prefer. One of the 40 changes in this order must of course be rounds; but it will happen at handstroke not backstroke as usual.

Based on these premises, when choosing a touch of plain bob doubles you can quickly generate the touch in your head knowing exactly where you will make the calls based on which call at which position has which effect on the order.

Choice such as wanting to call a bell unaffected - while ringing a different bell - are elementary to implement.

This is best demonstrated by example. Let's assume you are going to ring the 3rd, but you have a learner on the 2nd that you wish not to be affected throughout a touch.

Immediately you know all the coursing orders in the touch:

You can then choose for each change in the coursing order when you wish to make a call that will make the change you need.

What this means in practice is that:

However it gets much more interesting when you consider singles, which you can swap-in in place of bobs as and when you please. As such, any of the following call sequences - called from the 3rd - will still produce a touch that comes round as normal and will leave the 2nd unaffected at all calls:

Note: In this case, when you call a s4 to start and a 4 to end, you get a duplication of certain parts of a coursing order that makes the touch technically false, but not any less valid for practising with.

This same process can be repeated for any unaffected bell as called from any working bell.

If you do not need to have an unaffected bell you can have all kinds of fun.

Consider for example what happens if you ring the 5th and call a 4 followed by a H, or ring the 2nd and call sIsB.

In both cases you first push the coursing order and then pop it, putting the order back to the plain course. Given that in the first case the 5th makes the bob and then long 5ths, or in the second case the 2nd makes 3rds and then makes 2nds, both produce valid touches only two leads long.

The second of those examples is particularly useful for teaching making 3rds from the back as everyone else is unaffected or plain-hunting.

Fancy playing around, making unconventional music and irritating stalwarts? Come round at handstroke; whenever you like!

Just make whatever calls you need to reverse the coursing order and wait (but don't miss it). Listen for the first few changes you are familiar with coming at you backwards, or recognise that when you're in reverse-plain coursing order, rounds will come at your first handstroke at Home.